When I was younger, I spent an awful lot of time on the defense. I was constantly with my guard up, always ready to tell anyone who tried to disrespect me to check themselves. I was always feeling attacked and often it was my perception more than the reality of what was happening. I would find myself in an argument every other day, which had me labelled confrontational, which I thought was confidence and self-protection.  Interesting enough, it was not so much that there were situations that dished out disrespect that needed to be rectified, but often times it was simply because my perception of much of what was happening around me was always with a critical eye that would try to sieve and smell out anyone who tried to ill-treat me.

It was only when I found myself in university that I was challenged to look at life with a different lens. One that did not take offense at every given turn, one that did not look for offense and one that was able to differentiate offense from honesty. I later realized I did not take criticism well and I was only able to decipher that by being open to growth which came with introspection. In introspecting, I realized that much of my affront and constant need to confront situations, also stemmed from a place of insecurity. I was incredibly sensitive, and my defense mechanism was confrontation. I thought I communicated well, because I was quick to confront a situation, it was only later that I realized confrontation and communication are two different things.

It takes an incredible lot to be able to communicate, healthily at that. To be able to analyze a situation with a sober mind, one that seeks solutions as opposed to magnifying problems. It requires a critical objective mind, that can look at a situation. Allowing for facts to take epicenter, to come to a plausible solution. In the same vein, it takes a test of character to be able to retract from a situation to sieve through your feelings, so that you can analyze the situation without your emotions clouding it. It means reeling in how you feel and allowing yourself to be pensive first before reacting.

In most cases, when one is slow to reaction, you can better communicate what you think, because you have applied your mind. You can better communicate how something made you feel and how you propose the matter be handled, looking forward. It is not pointless back and forth in the form of an argument, because an argument rarely seeks a solution, but rather seeks to hurt and put your point cross without listening to the next person. It becomes about proving you are right, as opposed to hearing the next persons point of view. In as much as you may be right in your stance, you could as well be wrong. It is in opening yourself up to the possibility of being wrong and hearing out the next persons point of view that you open a healthy channel of communication.

Learning that came with its own set of challenges. It challenged me to learn how to take control of my feelings and to be in charge of how I feel as opposed to my feelings taking charge of me. It taught me to allow for my emotions to settle, before taking a decision as to how to react, to ensure that my reaction is not emotionally charged. It taught me to want to find a solution to any disagreement as opposed to wanting myself heard and not hearing the next person. It came with a great deal of growth, growth that was hard, but growth that I welcomed. I wanted to learn how to communicate, how to take charge of my emotions and to be levelheaded.

Healthy communication is learned, it starts with making the choice to be better and do better every single day. 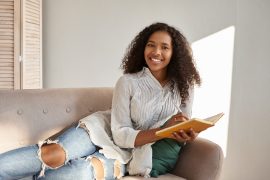